Importance of firmware updates for SSDs

Here is the good article about the complexity of modern SSDs, an importance of firmware updates and how DriveDx could help – “SSDs are more than simple hard disks (and how I found it out the hard way)“. Here are some quotes:

Few minutes after the reboot, I placed my MacBook in standby and I drove back home. Once arrived, I opened it up and, to my surprise, the system was completely freezed. Black screen, mouse visible and able to move around, but no way at all to log into it.

Another hard reset, and from here my calvary began, for almost three days. Long story short, I did many hardware checks for cpu, fans, checked task manager for broken applications or daemons, removed old apps I was not using anymore, and so on. I even feared my beloved SSD was reaching the point where too much cells were ruined, but a check with DriveDX showed me it was still running well. 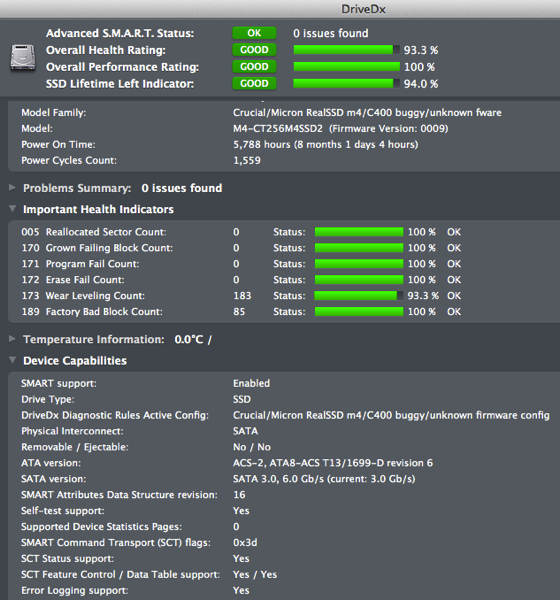 While I was running all these tests, crashes were more and more frequent, forcing me to reboot the system every time. One of the lines of this report however acted like an alarm bell in my head: “buggy/unknown firmware config”. A problem in my SSD drive maybe? Mi disk was 19 months old, and a quick search in Google about “Crucial M4 firmware bug” brought me to this article, saying this: “This bug would cause systems that reached a total of 5184 hours on their m4 SSD to become unstable. Once restarted systems would be stable until another hour had passed. The 0309 firmware update released today fixes this problem and allows users to update directly to the latest version regardless if the current firmware revision is 0001, 0002, or 0009.”

During these days lived one hour at time, I learned so much about SSD, and how they are far from beeing simple disks, and how they are instead really similar to micro computers. The firmware can be upgraded, it has bugs, and inside an SSD many activities are executed just like OS daemons: Wear Leveling, Garbage Collection and many others. By reading the release notes of those firmware versions I see clearly the improvements described, in terms of services, performances, right as in a proper operating system. Nothing comparable to old spinning disks, whose firmware is only an interface to interact with their controllers.

You can read full story on VirtualToTheCore Virtualization Blog.